Over the weekend I shared a story on Medium about a “luncheon” that my mom threw, and her favorite cookbook Bound to Please. In that story, the quiche I describe is Mom’s go-to quiche—a quiche Lorraine, made with ham of course, but also with a Pillsbury pie crust and two different kinds of pre-shredded cheese. Here’s the one that I made myself on Mother’s Day.

There was a time when I thought it was a good idea to try to make quiche a little less dairy rich, more egg-oriented—”healthier.” But that might have been the last time I made quiche (it’s been a while). Since then I’ve come to recognize it for the decadent dish it is and rather than trying to tweak it to be marginally less rich, I think I’d rather just eat it less often, reserve it for special occasions. 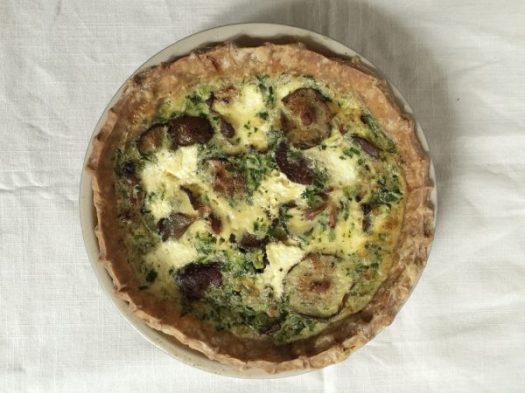 Due to never seeming to get a single-recipe pie crust to fit my pan correctly, I use a double-crust recipe, allocate a bit more of it (15% or so) for the quiche, and save the smaller portion for something else (in this case, a galette) later on. As for the fillings, they are endlessly adaptable. Green garlic is a fun springtime arrival—soft, gentle, dewy—as are sweet young leeks. I’m using those things in everything lately. Then the roasted mushrooms could very easily be pan-seared or even poached instead. I’ve incorporated a few of my tricks for working with pie crust, but the overall formula is pretty standard. Feel free to swap out another crust you like (or a prepared one…) and mix up the fillings to suit your own tastes.

1. Roast the mushrooms: Preheat the oven to 400 degrees Fahrenheit. Scatter the mushrooms on a sheet pan, drizzle with the olive oil and a few pinches of salt, then toss with your hands to combine. Roast for 15 to 25 minutes, depending on their size and thickness, stirring only once, so that they caramelize around the edges a bit. You want them to be juicy and soft, but not yet shriveled. Cool.

2. Soften the leek and green garlic: Melt the butter in a skillet. When foaming subsides, add the leek and cook until soft and translucent, about 5 minutes. Add the green garlic and cook for a minute or two more, until fragrant. Remove from the heat.

3. Prepare the custard: Whisk together the cream, milk, eggs, parsley, flour, 1/2 teaspoon salt, and pepper in a tall measuring glass or mixing bowl, until thoroughly combined.

4. Assemble and bake the quiche: Reduce the oven temp to 325. Scatter the grated parmesan on the bottom of the crust, then arrange the mushrooms and leek-garlic mixture on top, along with dollops of the ricotta. Place the pie on a rimmed baking sheet and slowly pour in the custard mixture. Carefully transfer to the oven and bake for 45 to 60 minutes, turning the pan every 15 minutes so that it bakes evenly, until just set in the center—there should be a gentle giggle when you tap the side of the pan, but no ripple, which indicate liquid beneath the surface. Err on the side of cooking it a few minutes longer if in doubt. Cool.

(Quiche is difficult to slice when hot—I usually make it ahead of time, then slice it while cold, and serve at room temperature.)

1. Whisk together the flours and salt. Add the butter and, using your fingers, pinch it into the dry mixture until you have a coarse, mealy mixture where the butter pieces are anywhere from the size of a corn kernel to the size of a fava bean. Dribble in 6 tablespoons of the water and mix with a fork, being careful not to mix too aggressively and activate the gluten, and continue adding water as necessary until the dough is well moistened and holds its shape when you grab a handful (I err on the side of more wet, because a crust that crumbles as you’re rolling it out is very annoying). Pour the shaggy crumbles onto a piece of plastic wrap, and then wrap it up tightly, shaping the dough into a flat disc as you go. Chill for at least an hour, or up to a few days.

2. Preheat the oven to 350 degrees Fahrenheit. Cut the dough into two portions, one about 15% larger bit larger than the other. Wrap up the smaller portion and put it back in the fridge, reserving it for another use. On a floured surface, roll out the remaining piece into a round about 13-inches in diameter. Transfer to a 10-inch pie plate or tart shell and trim the edges, but allowing enough overhang to tuck, crimp, or pleat, whatever you desire. Line with a square of parchment and fill with beans or pennies, then bake for about 15 minutes, until beginning to color. Remove the weights and parchment and bake again, another 10 minutes or so, until lightly golden. Cool.

Important Correction to Veggie Burgers Every Which Way: In the first printing of Veggie Burgers Every Which Way, Mushroom Burgers with Barley is incorrectly denoted as gluten-free in the table of contents and on page 64. In fact, barley is a wheat-free grain, but it is not gluten-free. Some people who follow a wheat-free diet are able to eat barley, while people who follow a gluten-free diet do not eat barley.
%d bloggers like this: